Traffic lights are one of the most important elements of road safety. They have been directing traffic in cities for more than a century. However, there is a mystery about these signals and the colors. Do you know why on the roads we can see red to stop, orange to slow down and green to start? These colors do have a precise symbolism.

Many years ago, means of transport were cars that did not need any particular signage to comply with traffic rules. Towards 1850, other means of circulation begin to appear and in 1886, the first motor vehicle also appeared. This is how the need to establish rules to be respected when driving was born. Among them, the red, orange and green traffic lights whose color is not insignificant.

The origin of traffic lights and their colors

The first city to have a traffic light East London, which already had heavy traffic and many accidents.

The first traffic lights were devices consisting of a gas lantern with two lights (green and red) which flashed alternately to attract the attention of drivers and passengers. It had been located near Parliament and the red light meant stop while the green light called to leave.

Over the decades, the first electric traffic light was born, in 1914 in Cleveland, Ohio. This was also equipped with only two lights (red and green) and operated manually. It was only after two years that traffic lights with automation were designed, first in the United States, then in Europe as well. 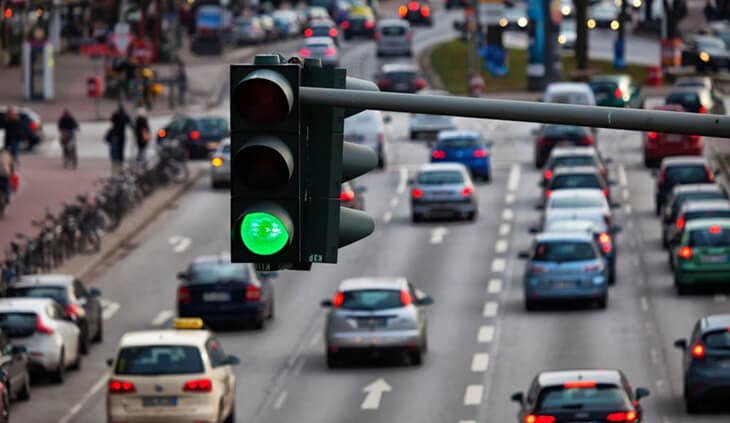 In 1920, the first 3-light traffic light appears in Detroit, invented by William Potts, and in 1923 the 3-color system of the Parisian Garret Morgan is born. Thus, from this period, the semaphore also had a different aesthetic structure.

En 1920, the first traffic light has also arrived in Spain, in the city of Madrid and more precisely between Gran Vía and Alcalá streets. Gradually, the traffic light has become a universal communication structure and is often placed high up to be seen even from afar.

Why are the colors red, yellow and green?

The colors are the same in every country in the world. They have not been chosen at random but have been specifically designed to provide meaningful and easy to remember information for anyone who often drives a car. Red is a color designed specifically to indicate danger while yellow calls for concentration. The green, meanwhile, invites tranquility to indicate to motorists to pass. These colors have an influence on psychology and therefore have a systematic impact on driving on the road.

Read also How to facilitate the passage of ambulances, police and firefighters? Practical advice that can save lives Plant a coin in your plant pots: no one expects this great result Can keys be added to the car key fob? The mistake that many people make Why do you have to soak potatoes in ice water before making fries? The trick that changes everything